No products in the cart.

Your personal, family and historical media memories are in danger of decaying and fading away altogether

You can save those memories, restore and preserved them it before it is too late 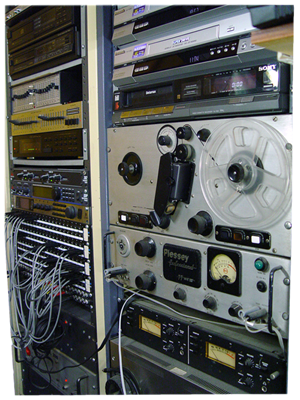 At Nostalgia Shop I restore memories in films, videos, photos and sound recordings

so you can share the experience with your loved ones.

I recover and preserve your film, video, photographs and sound of the last century to make them more accessible. Then you can relive, enjoy and share the stories behind those moments.

The media we used to record those memories deteriorates with time and can be totally lost to you and also your family and future generations – your kids, nephews, nieces, grand children etc..

My passion is to help you to retrieve the memories of those who once surrounded us. I treat your personal history with the same respect I would for my own. Film, Video, Photographs and Sound the analog media of the last century - and they are degrading and fading away.Some more quickly than others, but all those memories wrapped up in films, videos, photos and sound ...
learn more…
Shop Typical projects and what my clients are saying

102 min of Super 8mm short film reels transferred to 1 video DVD of her families history, set up to play each or all reels in as near date order as possible.

-had some 8 track continuous audio cartridges, they couldn’t play them and didn’t know what was on them. These were transferred and found to be tourist promotion shorts on various local features.

Transfer and restore Super 8mm films of her ballroom dance studio including past competitions and family scenes.

Transfer of a number of family Super 8mm films,

Scan of a number of 35mm slide of historical photos of the families business for publication.

Scan and careful restoration of an historical photo print of his parents.

Archival copies of past Mo Awards producers transferred from VHS video tapes to DVD for preservation and distribution.

27 VHS videos, 45 hours of family video, transferred to 32 DVDs and over 200 discs copied for family and friends.

4 hours of family video over 4 different video tape formats copied to DVDs in date and subject order, special copies made for close friends.

As a young girl she played the piano on the TV show Bandstand in 1972. Afterwards she was given an audio reel tape of her performance, she had never been able to ever play the tape till transferred to CD.

In 1981 the grooms parents gave them a Super 8mm film of their wedding as a gift, but they had never able to be viewed until transferred to DVD and their children were fascinated.

An fair audio reel tape recording was made of their wedding in England in 1969. After transfer the sound was greatly improved for better clarity and audibility and a CD made.

A transfer was made of a 16mm film produced long ago for TV segment when this client was running a fencing school. Shows a mock sword fight and fencing techniques.

2600 ft of Super 8 family films transferred to DVDs including a reel of a daughters wedding on a separate DVD as a surprise present. Restoration included colour correction and compensation for some darker segments.

As the keeper of the family archives Helen needed a quality way to preserve the families historical photographs and was very happy with the result.

2500 35mm slides scanned to a disc of high resolution images as well as video DVD slide shows. Plus transfer a number of his wife’s favorite 45rpm records for her birthday. Bruce was clear on what he needed and was happy with the result.

A compact cassette of an assembly from her school recorded with a portable recorder from the audience. A number of old school friends wanted a copy and once transferred was enhanced to make it a clearer lasting memory.

Transfer of films held in the archives from time to time, enhanced and produced onto video DVDs for preview viewing.

A number of reels of Super 8 film badly degraded from exposure to heat & humidity. Very special care was needed to remove the film struck together and to transfer because it had shrunk. Once in the computer the image was treated to improve viewability.

19 small reels of Super 8mm film shot by Carols father (now deceased) largely shot in and around the families dairy property, including 4 weddings and a 21st birthday party. A number of copies of the DVD were made for family members and a separate DVD of the weddings.

Glenn, Otford NSW
2 double album direct cut acetate discs of his father singing the lead role in two 1950s stage musicals. One fairly worn declicked in the computer turned out very well, the other very badly cracked and damaged, selected tracks were carefully captured and edited, the result not perfect but very much better than the original.

Michael, Sydney
“Many thanks for the great work you did in transferring my 8mm and super 8mm movie films to DVD, some being over 40 years old. Everyone who has seen the final product has been extremely impressed. Your personal and professional service and attention to detail has been second to none.”

Helena, Sydney
Copied a number of mini DV camera tapes and hard drive camera videos to DVD and a USB portable hard drive.
“The tapes from the first video camera we had of the kids growing up didn’t seem to have any sound on them so we bought another camera that we were told would be better but we couldn’t copy the video. I was glad to find someone who knew how to solve both problems.”

Helen, Sydney
On a cassette which Helen nearly threw out was found the only known recording of her mother playing the piano at a church meeting. The clarity of the recording was restored and copied to CD. “I am glad I found a way to save an audible memory of my mum and her friends.”

Christine, Blue Mountains NSW
16mm colour film of family life in the 1950s including 3 weddings, copied to DVD.
“The whole family was captivated by such precious memories of my aging parents during their happy youth. To see the twinkle of love in their eyes from long ago was just priceless, and affordable. Thank you.”

Ian, Sydney
A number of his own Super 8mm family films, including some with sound, copied to DVD.
“I am very glad for my family and I to be able see these films again. My projector was playing up and damaged one of the films, having them on DVD makes it much easier to view them.”

The National Trust in NSW

Acting as official restorer of archived multimedia material, helping with the restoration of archive library media relating to historical properties particularly within NSW and acting as restoration adviser.

4 DVD video set of the 2007 National Home Education Conference (11 locations over about 2 months), sessions from Brisbane were edited, condensed and authored into a 4 DVD set and a large quantity distributed to Australian and international home schooling families.

The facilities used to bring you these services are also used for professional production and post production of standard and high definition video, digital still images, digital sound recordings and audio visual media for internet delivery.

Send us a message

You have Successfully Subscribed!